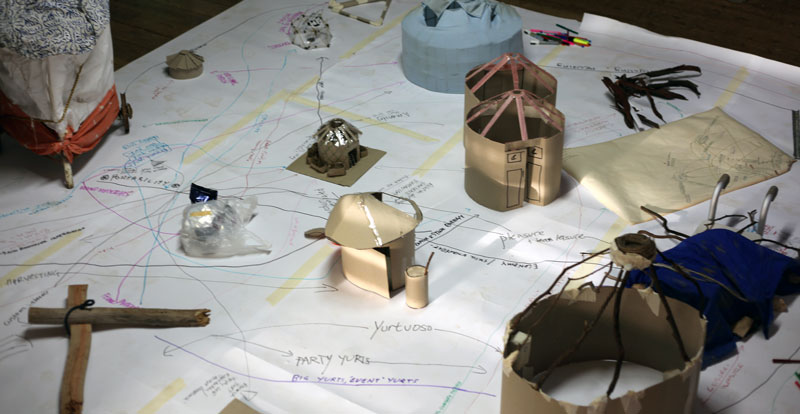 Yurt Empire is an attempt to graft an artist’s colony and economy onto a site undergoing urban renewal. It is a live art work about housing and living, a series of performative encounters and a discursive space exploring the the behaviour of cities, artist-led economies, urban renewal and a remix of permaculture design.

Yurt Empire will bring together 23 creatives to respond to the site in Green Square using the simplicity of the yurt design to explore the notion of shelter through the complicated lens of urban renewal, land value, and affordable housing.

This bold and adventurous work irreverently engages the nightmare of the “little Aussie Dream” home, as Sydney rises to become the second least affordable city in the world.

Creative Commons; 2013 Yurt Empire. Creative Commons licence as: Attribution ­Noncommercial­ Share Alike (CC BY­NC­SA) This license lets others distribute, remix and build upon the work, but only if it is for non­commercial purposes, they credit the original creator/s (and any other nominated parties) and they license their derivative works under the same terms.