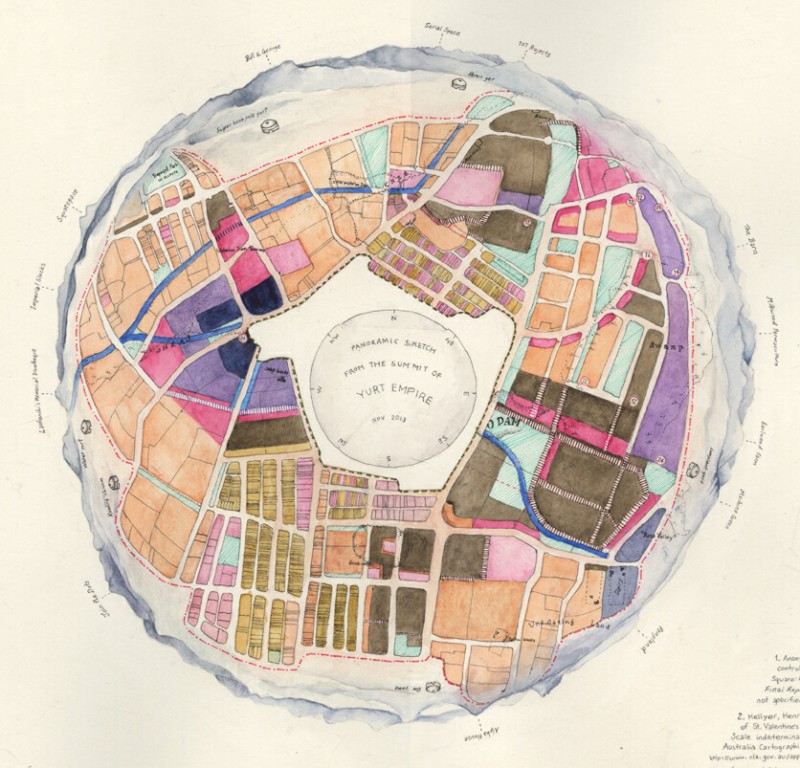 New from Yurt Empire’s Cartography Dept., as published in the forthcoming atlas-catalogue for Baadlands: An Atlas of Experimental Cartography 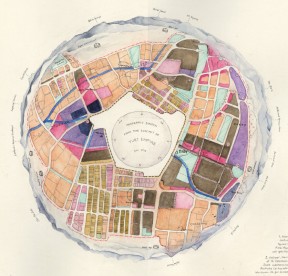 “Yurt Empire treats cartography as another space of occupation, as a device for looking, for positioning and for remaking. The map depicted in this atlas is an attempt to represent the project both as a whole and as a set of relations, as seen from this relatively early stage in the collaborative process. To begin with, the illustration is a hybrid of three extant documents: an early map of Waterloo (1880), a computer-generated design from a recent local government report on Green Square (2008), and a panoramic sketch from the summit of St. Valentine’s Peak (1827). Using the circular panorama as a vehicle from which to figuratively and literally survey the entire empire, we have marked out our own conceptual summit at the centre: the dog-shaped zone designated ‘Green Square Town Centre’. The dog is the geographical core of our project and the point from which we begin to build, traverse and imagine Yurt Empire.”

This map and other strategic artefacts from the Empire will be part of the exhibition opening at Tin Sheds Gallery TOMORROW Thursday 1 August, 6pm. The show also includes work by María del C Lamadrid (UR), Diego Bonetto and Adrian O’Doherty (AU), Centre for Urban Pedagogy (US), Santiago Cirugeda, Democracia and Todo Por la Praxis (ESP), Lorenz Aggermann, Eduard Freudmann and Can Gülcü (AT), Iconoclasistas (AR), Clement Valla (US), and Here Studio (AU).

[Image Credit: detail of map drawn for Yurt Empire by Tessa Zettel in collaboration with Jennifer Hamilton and Alexandra Crosby