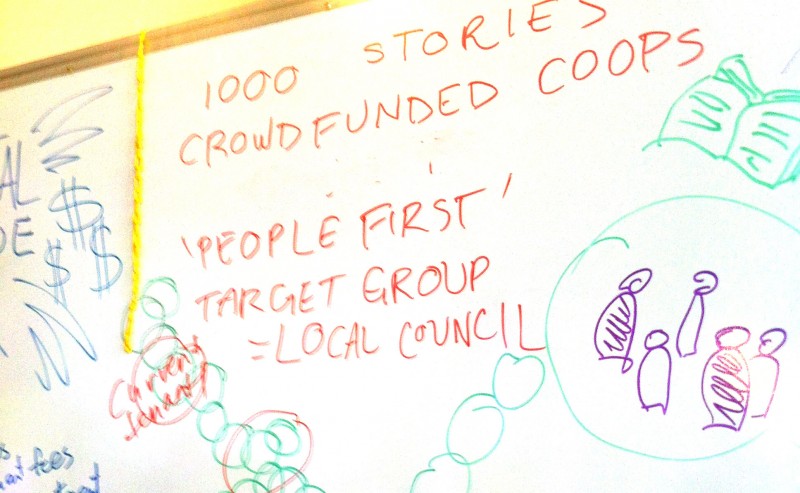 A team of Yurt Empiricists participated in a workshop at Vivid Ideas – Transform your Turf: A Story-Led Game to Co-Design Public Housing, 8th June, 2013, Museum of Contemporary Art .

This workshop proposed as its starting point the ‘wicked problem’ of public housing eviction, development, and gentrification. ‘What if the answer can be found in a simple game that can be applied to any problem? A fun game that can be downloaded and printed at home, a collaborative game that ignites the greatest power we all have: our imaginence (imagination + intelligence). Could local solutions created by friends and neighbours trigger landslide change?’

Naturally, we were intrigued.

The session was a 90-minute open-design game, drawing on storytelling and experience design. We played in 3 groups: storytellers, prototypers (Tessa Zettel joined this group) and 100% committee (Rebecca Conroy and Alexandra Crosby joined this group), which were each assigned different ways to approach the problem.

Facilitators, Ele Jansen and Jordan Bryon, were hoping for ‘a collective narrative that explains the solution, so it can be easily explained to outsiders.’ But we struggled with distilling a complex, layered problem (with economics at its centre) into a problem-solution, with a common language for all stakeholders. Yurt Empire has been exploring all the impossibilities for artists in the city, digging, disturbing, uncovering, and translating difficult city concepts, and we have not come up with anything ‘easily explained’. We have come up with a mess of maps and ideas that can be pulled apart, reorientated and designed into something new… but no solution in sight.

You can read about the intentions of the workshop here.

Yurt Empire has also been experimenting with how games can help us develop our collaborative practice. We recently attempted to play the ‘Game of Global Futures’, designed by anthropologists Anna Tsing and Elizabeth Pollman for a book titled ‘Histories of the Future’ (http://www.dukeupress.edu/Catalog/ViewProduct.php?productid=5718). It is a really great read. Many educators interested in encouraging students to think about the collaborations involved in social change use this format, see Eben Kirksey’s class try it here. Yurt Empire played the ‘Game of Global Futures’ with a focus on agents of change in Sydney’s urban development. It was slow, slightly confusing, and quite hilarious.

We are still working out how games can be applied to the problems we want to tease out.  We are not convinced that a format as open as ‘Transform Your Turf’ really considers enough the cheaters and rules and winners and losers (and we are not sold on words like ‘imaginence’). But we still wanna play: ‘Game of Homes’ has just begun!