In association with the exhibition User Generated Architecture, Christof Mayer and Andreas Krauth, from raumlabor berlin, will be running an intensive 2 day Generator Workshop in Sydney. And some of us from Yurt Empire will be participating! The Generator Workshops are international, experimental laboratories for instant, participatory building practices in public space.

Architecture is an experimental laboratory for a moment related to participatory work practice in urban areas. Architecture is understood not as an object, but rather as history, a layer of the history of the place. Architecture is a tool, in the search for a city of possibilities, the city of tomorrow! raumlabor berlin

The architecture collective raumlabor berlin work internationally at the intersection of architecture, city planning, art and urban intervention. Their installations, temporary structures and architectonic experiments explore how we use space and take the form of surprising interventions that change the way we encounter the city and each other.

Their projects include “Der Berg” (2005), a spatial installation in the former Palace of the Republic in Berlin; the “Eichbaumoper” (2009), an urban laboratory for the recapture of a neglected traffic junction in public space; “Moderato Cantabile” (2008), a festival centre in Graz and “Open House” (2010), a vertical village used as a generator for an open society in South-Korea and  “The KNOT” (2010), a laboratory for artistic production, dialogue and presentations in public space.

As part of the exhibition User Generated Architecture at Tin Sheds Gallery,  raumlabor berlin will present an ongoing document of their work, presenting past projects and a real- time user generated utopian city. Additionally, raumlabor members in collaboration with local participants will create an extension of the “Generator” series – creating mobile structures that offer new ways of communicating and interacting in public space. 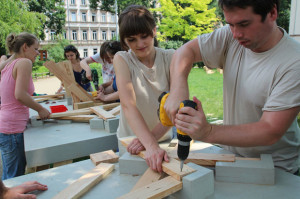