Notes from the field. Super Bush Pole Yurt set off during the school holidays to Ponyland, the property of Phoebe and Dave. This report was provided by Clare for the team.

Les, Matt and I hit the road on the 26th of September with 60m of canvas strapped to the roof of our Toyota Corolla. Our last port of call was Join the Dots- where we crossed over briefly with the Captain and high fived Jola and Adam before we hit the road. We were very happy to get a tip off about staying at Hat Head National Park on our way up to Nimbin. 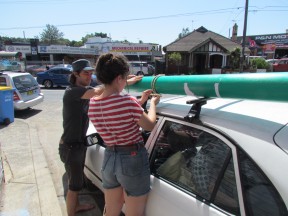 It was hot and it was windy. The highway got closed because of fires at Taree. Being in a situation where we didnʼt have to make it too far on our first day of driving, we turned off for a swim- beautiful. By the time we got going again, they had reopened and we drove through the hot night and saw ribbons of low flames tumbling off from the sides of the road in a lot of directions. It felt hot and we were kind of surprised to be able to drive through. We made it to Hat Head quite late at night and set up our tent in the dark with no fly. It is so awesome sleeping with no fly on the tent- there isnʼt much of the year when you can do that.

So, FULL STARS! Unfortunately our camping mattress situation was powerfully below par. We woke up feeling pretty weird. Walked around the Hat Head sand dunes- which are totally beautiful. We packed up and left only to realize that Matt has lost his wallet. We pulled over on the side of the road. I would describe whole family as being “in a mood”- real classic family holiday scenario. Matt would find it too demoralizing to unpack the tent and look inside for missing wallet, so we formulate long winded possible places for the wallet to be lost…on side of the road where matt reconstructed Lesʼ broken kinder surprise toy? In the carpark at Coles, Kempsey? On the side of the road where Clare over shot the national park turn off and we had to take stock and chuck a uewy? We continued into Kempsey to participate in various wallet scenario reenactments. I had lost my Credit Card before we even left Sydney. So this was serious- not enough petrol to make it to Ponyland and about $34 to throw at the situation. Kempsey does not seem like the kind of town where you drop your wallet and get it back. We mentally said goodbye to the remainder of Mattʼs Fellowship. Super Bush Pole Yurt nearly derailed before we even start.

We took stock at the side of the road. I looked inside my wallet to find an old cash card that I couldnʼt remember ever having used. Matt looked inside his phone and a couple of years ago, in the notes section Matt recorded a pin number. I went to the ATM. Heart pounding. MAGIC!! –it works!! Continue progress towards Ponyland.

I remember swimming at Woolgoolga as the sun set. Driving through tall crops and past wide rivers with back burning lighting up the sky. Petrol in the tank, cash in the wallet. Feeling Good. We made it to Ponyland were fed royally and steered in the direction of a loft to sleep for the night. Feeling my way along the mattress in the pitch dark my hands found their way to four or so kangaroo skin animal pelts. I think that the paws were still attached. Not expecting this. But still, it is very good to sleep on a mattress. 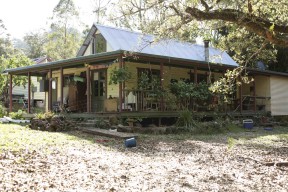 Ponyland is about 6kms out of Nimbin. It’s beautiful, there is an old house with a big verandah out the front, a beautiful library, chickens and a veggie patch. All the systems of Ponyland are in their early days and there are things that aren’t working- the septic tank (the system they inherited include an old fridge buried underground and filled with rocks) the showers- but while its limited infrastructure struggles with the number of people it is supporting (this fluctuates but at the time of writing there are about 12 people living there) the Ponylanders are holding it together, and building something anarchic and beautiful. An image maybe best summarized by three young men returning to the house completely covered in human shit after taking the barrels of poo too wet to compost away from the main toilet. This would have involved manhandling blue plastic tanks of shit on to a ute, tying them down, driving them to the appropriate place and emptying them out. So disgusting, but they did it, and that is why Ponyland is going to thrive over the coming years. I have utmost respect for the place and the people- there is such a clear sense of values being lived and that integrity will win through, but for the mean time we just need to not look too hard at the chickens pecking in the septic overflow.

Country living is a pretty full time occupation. Dave has a leadership role and is very competent at any given task. In the time that we are working together Dave is caring for Han and heavily pregnant Phoebe, trying to help Les with developing a Nimbin social life, fixing the broken ute with a local Mechanic, he is asked to kill a sheep and he helps his mum to move into the new and beautiful house she has built at Ponyland. On one occasion he notices that the water tank is on the brink of running out and swings the pump into action. It is within this broader context that we are trying to attack the building of the super bush pole yurt. 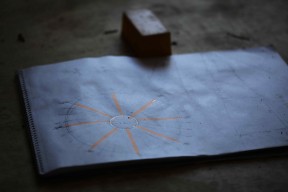 We decide to have the poles for the wall milled in half and to use wing nuts and threaded rod to bolt the walls together. We realize that this yurt is going to be impractical- heavy and the elements are big. We need to think of it more as a marquee/town hall and less of an elegant Mongolian housing solution. There are a couple of local peeps who have a trailer that the Yurt will fit on- which is great, but moving it around it going to be quite the task.

I have a difficult time believing in Toonos (the circular structure in the centre of the Yurt that the roof poles terminate into). Dave and Phoebe patiently re-explain how it works, but I am in that mode of trying to comprehend how planes stay in the sky and I just canʼt figure it out. Sadly, this is not the first time we have been over this together. 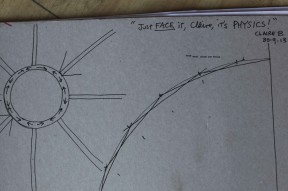 We head down to the creek to do a stocktake of the timber that Dave and Matt cut down in April. We have more than we need. Not all of it has been debarked. We talk about getting the miller to come and set up down at the creek so that we donʼt have to move the timber until it has been cut. We also see the UFO built by Jackson and Kat and avail ourselves of the wild raspberries. 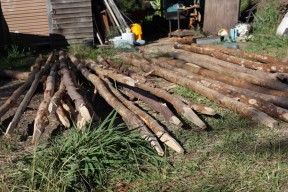 We start organizing the poles, measuring, making categories, and debarking. 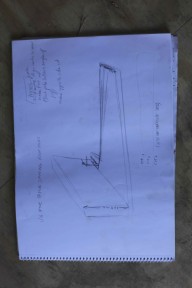 We design and build a jig for cutting the faring down the roof poles.

One of the idiosyncracies of the Super Bush Pole Yurt is that the roof poles are organic shapes although the lengths of the poles will be uniform the weights will be slightly different, so we need to have matching poles in equal and opposite positions around the toono.

We started to hit a good working pace and decided to aim to get the roof built and assembled on the ground so that we can determine if the central support poles are necessary for the Super Bush Pole Yurt.
We started work on the Tonno. First we created an area to build a circular frame out of angle brackets. 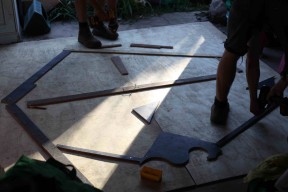 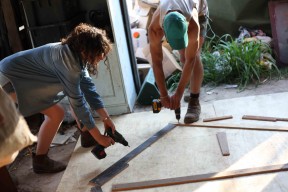 Then Dave set to work at making a home wood steamer. Which was a thing of beauty. 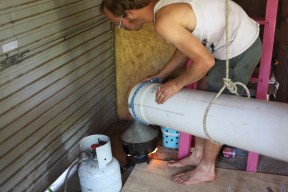 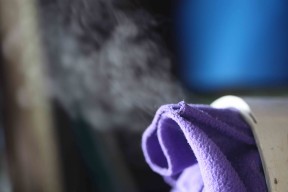 We realized that our goal of getting the roof built was pretty ambitious and we didn’t really have enough time to start working on a plan b if our laminated plywood toono didn’t work first time. 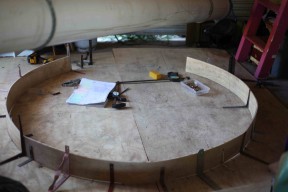 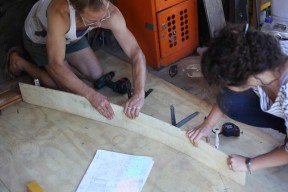 The steamer worked pretty well and we managed to mould a number of plywood pieces on to our frame. However, we felt like the toono made in this manner would be untenable because of needing to maintain the integrity of the connection between the layers of wood as we were laminating them together.

This was a disheartening end to phase 1 of the process.

We made a plan to come back to the toono with a new design that has a central cross made out of four bush poles joined together at the centre of the toono. Bolted to these are four we will have four laminated plywood quarter circles with the holes cut out of them for the roof poles to recess inside.

The build will need to be continued early next year, at this stage we’re looking at 2 weeks, possibly in February/March, 2014. If Dave is able to get the wall pieces milled before then, it’s possible we could the project in that timeframe. If Yurt Empire goes ahead in March 2014, we could look at completing the build as part of the installation. 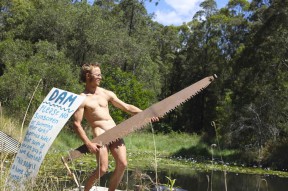